Cheese, what idiots we are.
Two points, related:
1) It’s preposterous for a kleptocratic government, already guilty of taking your money, putting you in school, lying with every mouth … to demand “truth” from an accused.
2) I understand that Chinese “justice” has always assumed that the defendant will lie, attaches no value to testimony by those in jeopardy.

I add that I personally believe that people who already “benefit” from the kleptocracy, lawyers, senators, pop stars (including baseball stars) should be prosecuted for lying; but the vastly more numerous victims of the state, the schooled robots, should be utterly exempt from any such expectation. (Persecute Nixon for lying, not Crazy Horse.) (Of course Crazy Horse didn’t lie (that I know of) whereas Nixon never did anything except lie! (the best we could tell!))

(I’d like to see Clemens offer to give some of his fat back: have his jowls drained, then and there.)
I may add more, as usual, scrapbook style.
2012 06 18 He’s off, got away, scott free. The jury says he’s innocent, didn’t lie!

The image of Clemens that’s perpetual in my mind has him standing on the mound, defiant, after he’s just bruhed back a series of batters. The opposing team is chaffing to kill him! But the umps protect the predator: from justice.
(I’m reminded of the Mad comic version of a Flash Gordon cover. The many tentacled monster has Dr. Zark rolled up and helpless and he’s salted and peppered, several tentacles brandishing forks and knives: and Flesh Garden asks the sexy Dale, “What makes you think the monster is going to eat Dr. Zark?” 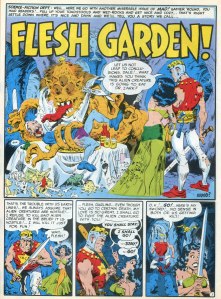 Gosh a’mighty, I never thought I’d actually see it again: but a search produced a repro instantly!
I don’t think my “quote” was too far off after sixty-odd years! And I had the names right!
And what a kick in the teeth to be reminded that the art was by the great Wally Wood!

Seems to me that some modicum of honesty is requisite to intelligence. If we look in the mirror and see not kleptocrats but Christians, we’re still in the same old trouble.
View all posts by pk →
This entry was posted in justice, law, pk Teaching, social order, society and tagged politics. Bookmark the permalink.