One night Hilary and I were coming out of Minton’s Playhouse. Her VW was parked on St. Nicholas Avenue just a short stroll to the west. 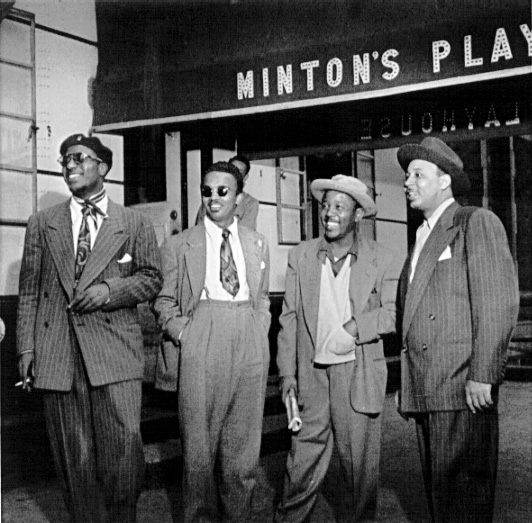 A bunch of guys were draped on a parked car next door to Mintons, still on West 117th St. (This was the mid-1960.} A dog, a German shepherd bitch, was lying at the feet of one of the guys. I paused, offered the dog my hand to sniff, petted her, scratched under her chin, this is like maybe 3 AM, told the guy holding her leash that we had a German shepherd.

Guy introduced himself as Martin, said his dog was coming up on a year old, would come into heat soon, how old was our dog? Just a little over a year! Yeah, sure! Why don’t we mate our dogs?
Standard deal: Martin gets the litter, Hilary and I get the pick of the litter.
Good, we exchange phone numbers.

The story is coming, let me clarify: I’m WASP. 3/4 German, 1/8 English, 1/8 Scots. Hilary is half Scots, born in London, English as all get out, and half Austro-Hungarian.

Minton’s is in Harlem. A jazz shrine.
I frequented Mintons from the later 1950s through the 1960s up until the events of this story. Martin broke my heart, pissed me off, and Minton’s closed anyway: a forgotten shrine.
I saw a documentary in which Dexter Gordon attempts to explain the importance of Mintons to a famous journalist: the journalist — of the common man, Brooklyn, but white, Irish or something — never had a clue!
I’ll fill in real names as they come back to me: recall time slowing, recall evaporating: don’t get old. Ah! Jimmy Breslin.)

Mintons Memories
First time I ever went to Mintons, I was by myself, Jo Jones may have been the band that nignt. That or another night Jo Jones soloed on his trap drums with his bare hands, fabulous, I went crazy!
One detail I’m sure of from that first visit: the bartender, Bill, took this lone white teen under his wing. I was drinking a beer, facing the band stand: that is, I had my back to Bill behind the bar. Bill tapped me on the shoulder, said very nicely, helpfully, “Let me explain something to you about manners in Harlem: down town you can turn your back on the bartender, it don’t matter; but up here the bartenders might take it as an offence, might take if personally, might take exception … I suggest that you start practicing turning your shoulders at least 1% toward me: and make sure you do that when I go to Smalls, and the Club Baron …”

Future visits I always made a fuss over Bill, introduced Hilary to him, and her sister, Alison, as though he were the owner: and always had us all partly face him no matter where the musicians were.

One thing I loved about Mintons:
No matter how broke I was, I could go there. Birdland charged $2 to get in, like a movie theater! But Mintons alwlays had a few free loaders, couldn’t afford a beer but wanted to hear the music, see the women …
Bill said that as long as they kept out of the way of the paying customers they were welcome.
I loved Harlem, I loved Mintons.

One thing though: if I wanted to watch really sexy women dancing, I went to Smalls, not Mintons.

Years later, from Martin, as a matter of fact, I got an explanation of sorts: Mintons was in the Hotel Cecil: the hotel was very much a whore house: Minton’s was bebop, jazz, cat house; Smalls was more like for swinging singles. No doubt there were drugs both places. American Gangster depicts Smalls as a business front for a heroin mogul (Denzel Washington). But when I was an undergrad, first going into Harlem, Wilt Chamberlain was taking over Smalls: it was bar, food, jazz, dancing …
And, Jesus, what girls!

Now that I’m dancing again, seventies or not, I wish I were there right now! I was an idiot not to dance there in the 1950s! The girls were dancing with each other, for Christ’s sake! There were no males on the dance floor! I shouldda gone up there and showed the world you don’t have to be black to have rhythm, be able to move.

Martin phoned us when Princess neared heat. He brought her over to Riverside Park. Angus, our dog, went crazy, kept trying to lick her. She grinned, held still for only a second, then swished away. Angus went right back after her, she tolerated a lick, then turned away.
Someone explained to us to wait for the eleventh day: she’d cooperate at full heat, not before. Hil and I drove Angus to St. Nick’s Avenue, Martin lived right above where we’d been parked when we met him: As we got near Angus got very agitated, Princess barked from her second story window. My driver’s windon wasn’t open enough for a mouse to get through, but Angus squeezed himself flat as toothpaste, Princess jumped from high over the walk, they met in mid air. By the time the dogs landed on the sidewalke, Angust had pentrated, come, and the two were helplessly joined for the next twenty minutes or so. We threw a bucket of water on them: silly, they detached when conception had been guaranteed: we should have left them alone.

All was fine then. Hil and I would come over for dinner. Martin would go out for take home chicken, we’d eat and watch Tarzan on the TV.
Only later did Martin explain to me: his girl was a whore, he was her pimp. Everything in that neighborhood was prostitution: excapt that cute high yaller gal across the street: east side of St. Nicks: both Martin and I lusted for her. So, I guess she wasn’t a whore: the one really good looking girl in the neighborhood.
“Man,” said Martin, “do I want to bite her, right on the cheek!”
Yes! Exactly. Her fanny was irresistible.

I had a neighbor on Riverside Drive who wanted to buy Angus’s puppy. We’d paid $125 for Angus, our friend would pay us $125 for the pup.
But Martin never let us in the house again, but for one time: to see the pups: when they were ready to be weaned and sold he was selling them all off @ $0!
I sued him! Went to Small Claims Court! Paid to do it! The court found in my favor, send Martin a registered letter. Pay up, says the might of the law!
Never delivered.

Martin was in the black market, he didn’t exist! had no address! The cops couldn’t find him! (Didn’t want to try.)

I was reminded of the scene in Vittorio De Sica’s The Bicycle Thief: the guy whose bike is stolen seeks his bike in a neighborhood so bad that he’ll go in looking for his bike and come out looking for his balls.

quick note while I work, I quote the above pic from a blog I only first glanced at a moment ago. From the suit, the way the cigarette is held, the beret, I say that’s Monk on the left: but, I’m loosing my eye sight in my old age! The guy on the right I don’t know, the other guys I know as well as my cousins but I’m stuttering and stumbling. Clarify in time.

Seems to me that some modicum of honesty is requisite to intelligence. If we look in the mirror and see not kleptocrats but Christians, we’re still in the same old trouble.
View all posts by pk →
This entry was posted in chronological pk, grad school, stories. Bookmark the permalink.