Not the raw continent. Not the American continents before the Late Pleistocene. Not Hiawatha’s north east. No: Tom Sawyer, barefoot, fishing Hannibal, Missouri with a cane pole. Maybe Huck saunters by. Maybe Beckie Thatcher sees them: from a chaste distance.

Now: cheap-energy America: gone Hollywood. The guy, color-coordinated, blabbing on his cell phone, using TV cameras and a bank of monitors, backs up his third of a million dollar BlueBird. [@ K. early 2000s] Hits the concrete guard post anyway. The over-night campground landlord who’s trying to help guide him onto a site originally planned for a tent, then renovated for a eighteen-foot Winnebago, didn’t have to jump too far out of the way: he knew better than to be standing anywhere near the motor monster.

My tackle dealer just helped me fix a broken rod tip. He always tells jokes, asks me to tell him some good ones. I also bought a couple of size 8 poppers, and hung around to discuss price / quality for the low end of bait casting reels. My dealer showed me a Garcia reel I could get for $59.95: lefty or righty; black and gold, or blue and gold, or black and silver. The conversation spread in the direction this module is taking: a direction I’m always ready to pursue. I mocked the guys with the $40,000 bass boat, with the 200 hsp motor, with the foot-controlled front-end-mounted trolling motor, the full rack of bass rods, the full complement of elecronics, the scented, rattling Power worms, who’ve never caught an eighteen inch bass: and never will.

He told me about a guy who came in looking for a rod: his one criterion was that it had to be red. I told him about the Ms. Millions I’d lived with in a marina on Hilton Head Island who, doting on her grandson and, knowing that I knew fishing, went the other way and bought a $19.95 K-Mark spinning combo to equip her grandson. The kid never got the lure near the target and the combo imploded by the fifth attempt. The kid may have wound up thinking that he was a klutz. His grandmother may have thought so too.

When I lived in the Everglades I recommenced fishing, having for years been too busy writing. My favorite buddy there was a gal from Texas who fished the bank by the boat ramp every day, using a cheap outfit to drop a minnow under a bobber amid the hydrilla-choked spatterdock. 7 AM these obscene bass boats would launch and roar off into the ‘Glades. Mid-afternoon they’d roar back: and buy their bass from Marty’s full string. What makes these lawyers and accountants and furniture store executives think that a $60,000 fishing budget equips them to catch a single full-sized bluegill? Anyone can learn fishing skills: in a fishing environment; not in an office.

What makes a guy who rode a desk for forty years think that because he can write a check for a BlueBird, he can also back the beast into a tight hook-up? Again the skills are learnable: by handling big equipment; not by submitting decades of forms for payment from Medicare.

One upon a time Rod Laver or Ken Rosewall or Roy Emerson, some of the most skilled tennis players ever, arrived at the major tennis tournament with their supply of wooden rackets in a paper shopping bag: the same bag they’d carry the groceries in. Once upon a time you could tell a runner because he was running. He was probably wearing shorts and some kind of sneaks. Now the gal arrives at the tennis court immaculately coordinated: in her outfit: for her first lesson. Her graphite racket is sheathed in its own special weather protector. She can’t get the ball over the net. Then she can’t keep it in the court. Typically she never has a second lesson. The guy arrives at the track, his outfit also coordinated. His shoes have everything but turn signals. Like the tennis gal, he too is blabbing on a cell phone. Everything near him is emblazoned Nike. Is he paid to advertise Nike? No. We soon see that he can’t even touch his toes.

One upon a time the troglodyte chipping the flint was the troglodyte who knew best how to chip the flint. Now every moron has an attic full of Cuisinarts and Oster blenders and Ginsu knives. In the dining room, the father can no longer carve a presentable slice of ham. One upon a time dad knew to get the knives professionally sharpened periodically. And dad would re-hone his carver every few strokes. Mom too had the idea in a pinch. How many people can sharpen a knife today no matter what equipment you give them?

I remember shaking my head at the Michael Douglas corporate raider when Wall Street came out. He lives on the beach. Good for him. He gets up before dawn. That’s fine. He walks the beach before sun-up. That’s great. But he carries with him a portable telephone! He calls people from the beach at 6 AM! And the 1987 phone looked as heavy as some WWII equipment! What’s the point of living on the beach if you take the world there with you?

When I was a kid people had just been through the Great Depression. Then there was rationing during the war. Then there was this abundance. It promised to continue. I was all for it. We’d had, I soon learned, a century or more of vociferous political agitating for the poor to be rich: or at least less poor. I wasn’t a materialist, but I was for the poor being less poor.

In contrast we’d read Heinrich Boll stories in which a family was happy to look through the colored plastic handle of a toothbrush for Christmas morning. Folk singers talked about making their own toys as kids in Appalachia. Some of them learned to play their $2 guitar, ordered from a catalogue, saved up for for years. Out of the box, no lessons, no books, just getting different sounds from the thing until the sounds were ever-less awful, then ever-nicer, some acquired astonishing — and original! — mastery of that instrument.

But soon after the war, our abundance became obscene, our wastefulness damnable.

Don’t you turn the lights out when you leave?
Oh, it’s covered in the rent.

More on the subject can string below, scrapbook style, as it occurs to me to add it (and as the above continues to be edited). Another word now though on Marty: the fishing gal mentioned above:

Marty didn’t fish from a $40,000 bass boat. Marty didn’t fish from a row boat. I did take her with me in a borrowed canoe several times, but mostly, Marty just fished from the bank: right by the boat ramp, full of noise, spilled gas, and bustle. But Marty never took her eyes off her bobber. Marty knew when to set the hook. Marty knew how to set the hook. Bluegills, oscars, pickerel, bass (some good bass, really good bass), mudfish … would accumulate on her stringer throughout the day. The luckless, and generally skill-less fishermen would typically buy her bass before she got them back to her tent site for cleaning. But every night she would have a bountiful fish fry for herself, her boy friend, and her boy friend’s friend and his kids.

When we were in the canoe, Marty would out-fish me every time. (Of course I was out of practice.) (And I got better.)

One outfit Marty couldn’t have filled her stringer with was the one my Hilton Head girlfriend bought for her precious grandson. She wasn’t being malicious; just ignorant: and too complacent to imagine that quality might relate to results. Quality; not price. Marty’s rig was cheap, but it functioned. Tom Sawyer’s cane pole was free for the cutting: but Tom had to know which one to cut. Then he had to learn how to use it. No matter what I bid for Babe Ruth’s bat at auction, don’t expect any ball I hit with it to go over the fence.

My girlfriend signed off on unbelievable amounts for dinner at a restaurant. She paid big bucks to keep her 1960 Buick convertible pristine-looking in the 1980s. She wasn’t cheap; she just failed to imagine a relationship between equipment and function for a skill she didn’t have. Never would she have bought the kid a scruffy Buick. No, that Buick would have shone. 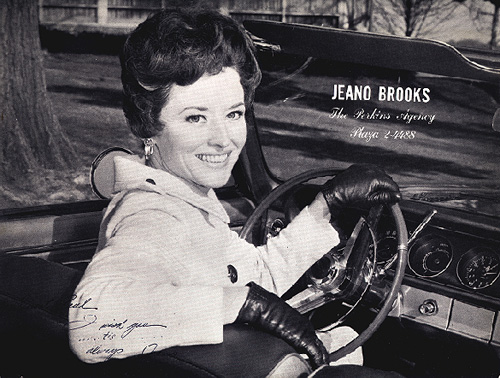 Jeano wanted me to call her by her stage name, Brooks.

2012 10 07 Resurrecting this all these years after first posting it, the material aging then, I see scads of things to add: but for the moment I’ll stick with merely one high school memory. 1950s, car culture, privileged community. Ed’s father owned a huge hardward store, they lived in a three story mansion, lots of servants … Ed paid extra to stick little plastic “rockets” on his fenders. Cheez.
But Dick! Dick paid a few dollars to have a plastic “phone” glued to his dash. Dick would drive around the school lot pretending to be in conference on a cell phone, while driving: in high school, in the parking lot, in 1954 or 55! Wall Street was made for him.

Seems to me that some modicum of honesty is requisite to intelligence. If we look in the mirror and see not kleptocrats but Christians, we’re still in the same old trouble.
View all posts by pk →
This entry was posted in civilization, pk Teaching, social order, society. Bookmark the permalink.