Several pieces at K. over the decades have dealt with segregation by gender as well as by race, while themes of segregation by economics are ubiquitous in and out of K. Yesterday I found myself telling Jan about McSorley’s Old Ale House and realized that I hadn’t yet mentioned it.

I loved McSorley’s in the 1950s, still occasionally visited it in the 1960s. My father-in-law and I had a couple of ales there one evening while Hilary waited for us, fuming, in the car: no women allowed. I was repelled by it once the women had liberated it in the 1970s. 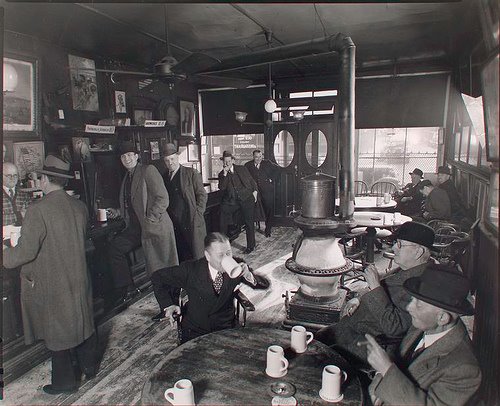 I’ll introduce McSorley’s furhter in a moment. First, the purpose of my visit today is to make one point, the point I was making to Jan: McSorley’s was unmistakably quaint; what I loved, what surprised me, took a couple of visits to notice: it was so peaceful. It was the most peaceful bar I could think of. You expected brawling Irishmen; you got old men sitting quietly around, smoking pipes. A Franklin stove, sawdust on the floor, paired mugs of ale for 25¢, half of them head, home brew, the only beverage on sale: no whiskey, no wine, just McSorley’s Ale.

Men, at peace, no women to show off for. There was no cursing, no profanity, no shoving, no arguing. No fisticuffs. No pistols, no knives. Who was to show off for?

One story had it that the company that bought MmSorley’s Ale was owned by a woman. She came to inspect her property and the bartenders wouldn’t let her in! “Come back after midnight, that’s when the place is yours.”

It wasn’t just ale: the food served was cheese, crackers, and onions. Steaks were served at limited hours on particular days.

Abe Lincoln visited. There was a Wanted poster for John Wilkes Booth on the wall.

One thing I loved about McSorley’s was the gargantuan old urinals. I was already smitten by the majestic urinals of the Whitehorse over on Hudson and 11th. McSorley’s was even more majestic: porcelain from here to there.

I believe the women should have liberated McSorley’s in 1972 or so, whenever it was. Then, having made their point, and certainly there was a point to be made, they should have withdrawn, and left the bar to it rightful atmosphere. The Jew should force himself into the New York AC, and a Black, and a Buddhist: then withdraw and leave the bigot-house to the bigots.
I think the women should have enjoyed hiking their skirt and pissing into the urinal; not demanding a women’s room!

But the urinals shown here are the tiny awful modern ones. No, no; you could hold a conference in a McSorley’s urinal. The Nineteenth Century didn’t spare the porcelain.

Seems to me that some modicum of honesty is requisite to intelligence. If we look in the mirror and see not kleptocrats but Christians, we’re still in the same old trouble.
View all posts by pk →
This entry was posted in culture and tagged culture, gender, segregation. Bookmark the permalink.