This post needs a complete overhaul, merely duplicating it is impossible. These days I try to quote pictures already online; in 1998 I scanned pix, edited them, retouched, resized … Today I can’t find my favorite Mishima pic: so I upload my old one: 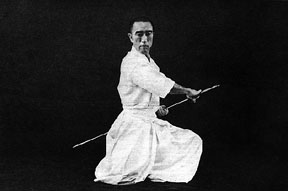 There. I like Mishima. I like genius, I like crazies, fanatics, monomaniacs.
I like kendo, I like Japanese militarism: so long as it’s been thoroughly defeated (and can’t wait till the US joins it in defeat). I’ll root for Hitler after he dead, no longer on the march. We root for Jesus: I like to root for Genghis Khan too.

So, decades ago I uploaded that pic and blabbed of others. Now I read in the original text:

A cameo of Japanese novelist Yukio Mishima: he of the spectacular cultural and political suicide.

Wanting a picture of Toshiro Mifune for a note to my modules on family, I knew where to look: in my scrapbook of memorabilia. New York’s Little Carnegie Cinema, which had premiered Yojimbo, had also let me take home a couple of publicity glossies once the run was over. Other photos I’ve used similarly, the one of Brando for example, were found at the same time as was this black and while of the late Yukio Mishima, clipped from a newspaper, probably at the time of his famous suicide.
I’d kept it because I think it’s a beautiful photograph. The kendo which Mifune studied for his action roles became for him a genuine discipline. Mishima’s immolation proves that Mifune wasn’t the only famous contemporary Japanese to take his bushido seriously. One aspect of the photo’s beauty for me is how staged it looks simultaneously to looking so real. The writer too was an actor (as well as a director).

I can’t know the degree to which the modern Japanese cult of bushido is sentimentalized; I certainly know how much contemporary Western regard for chivalry is sentimental. (By contemporary I guess I mean from Mallory, through Scott, to Camelot.) (I also know how much is a-historical bull. See Meta-Oxymoron.) But the genuineness of Mishima’s final act was unmistakable. Let me review:

First, the ritual of seppuku has already been introduced at this site in my piece on Legitimacy. Here I’ll add that in the degenerated form of the ritual, the suicide might not even have been given a real knife with which to cut his stomach open. Sometimes a fan or a flower was put in the knife’s place. The moment the devotee reached for it, his second would behead him. Second, you should be aware of Mishima’s last great news event. For reasons I won’t even try to fathom, Mishima believed that his culture should return to old Japanese values. He broke into Japan’s military headquarters and committed ritual seppuku there to record his protest. Please note: he wasn’t fooling around. He didn’t use a fan or a flower, but a sharp knife long enough for the purpose. Neither was he beheaded the moment the blood started to flow in earnest. Mishima’s belly cut was the longest recorded in this century. He’d gotten two-thirds of the way across his belly before he was put out of his agony.

Anyone who knew his work had occasion to know also his obsession with the ritual. As a young man he had written, directed, and starred in a film of his short story on the subject. The Bleeker Street Cinema premiered it for the United States in the wake of the publicity over his death. I went to see it. And that story is fully half of the occasion for this note.

There was maybe one other person in the theater that afternoon. Good. I like a theater to be full if I think there’s a chance the audience will resonate with the film, play, or speech. No one who hasn’t felt the gesampt spirit of everyone in tune with the same thing can know how full a theater experience can be. (See Legitimacy, above.) (Indians jam a stadium for the sole purpose of feeling the press of their united presence. Reminds me of how I used to ride the subway just to be in the crush.) But if the event is off-beat, I want the theater to myself. Just before the logos rolled a young woman trooped in with a dozen or so gradeschoolers. Oh, well.

The film puts its soldier hero into a double-bind. (The phrase is Gregory Bateson’s and all literary pundits should be put on bread and water until they’ve read at least that part of his essays.) There’s been an attempted coup. A number of the protagonist’s fellow officers were involved. He’s assigned to arrest them. Damned if he doesn’t; damned if he does. The double-bind. The Japanese know the way out.

Wagner’s Liebestot monopolizes the music track throughout. Mishima’s camera loves Mishima’s jaw, his young bodybuilder’s body. But Wagner’s most tormented ecstasies cascaded through the speakers when Mishima’s lap was filled with what we were supposed to take as a quivering mass of bloody intestines.

The poor benighted schoolmarm was having a terrible time wrestling the last of her kids out of the theater. She should have had to pay for a special make-up screening so I and the other weirdo could watch our movie undisturbed.

The other half of the occasion for this piece is this: apart from knowing a little of Mishima’s reputation, from hearing of his protest, and then, seeing that movie, I didn’t know Mishima at all. My sister-in-law had a paperback of some of his short stories. I’d read part of one, but hadn’t really gotten into it. But no longer. My sister-in-law must have left her book mixed up with my wife’s. My wife must have left her books mixed up with mine — because I found it the other week.

Lo, & behold. Mishima is one great writer. Check out Death in Midsummer, for example. I’ve even now read the story the movie was based on: translated as Patriotism. I think the film was titled Seppuku, but I’m not sure. You can’t trust titles from other languages and cultures anyway. I’ve seen one of the most famous Kurosawa films as The Seven Samurai, as The Magnificent Seven … I have no idea what the Japanese title was.

(Of course, once the Hollywood imitation came out as The Magnificent Seven, people assured me that I could not have seen the original under that title — but I did.

2002 01 14 Then again, now-a-days we can look things up at the movie database. Kurosawa’s title is Shichinin No Samurai. They even back my memory of the alternate title!

Japanese was the first foreign language I ever studied, thanks to my childhood friend’s brother-in-law bringing a GI handbook home from WWII. Rudy and I never got much further than the counting part, but I know that shichi is seven. The samurai part we all know. Maybe someone will fill me in on the nin and the no.

Yesterday I got a reply: in the embarrassing circumstance of having forgotten I’d asked the question. Sven André of Lund, Sweden informs me that “nin” is a counter particle needed when the thing being numbered is persons, other particles being reserved for other categories of thing. “No” is akin to a possessive but I’m not sure I understand the grammatical fine point well enough to repeat it.

In any case, it just shows to go that there are no shortcuts to learning another language or culture: each has its own character. Guessing from one language to another doesn’t do.

2004 04 19 I’ve had a DVD on my queue at netflix.com for some time now with Mishima in the title and only last week or so realized that it was made by Paul Schrader: he of Raging Bull, of The Last Temptation of Christ … So I’ve bumped it up the list and should receive it any day now.

2016 08 15 I’m just rereading Joseph Campbell’s Myths We Life By, pondering Campbell’s contrast between east and west, simplifying: Europeans developed a cult of individualism; India, China, Japan did not. Mishima was acting as a member of a caste, not as a independent character. Yes, like a soldier, obeying orders, not inventing anything.

PS What brings me to this post today is its mention of the Bleeker Street Cinema — as I prepare to jot memories of classic-repertoir theaters around Manhattan. The east / west business is purely coincidental.

Seems to me that some modicum of honesty is requisite to intelligence. If we look in the mirror and see not kleptocrats but Christians, we’re still in the same old trouble.
View all posts by pk →
This entry was posted in others' stories and tagged Mifune, Mishima, Yojimbo. Bookmark the permalink.