This morning I did one hundred belly crunches. First time ever?
In 2007 I was exercising and dieting madly, got down to 145 pounds! In my exercise marathons then I don’t doubt that I did one hundred crunches, but not in one series without getting off my back.

The nicest thing today was doing them side by side with Jan. Her lower back has been bothering her, sciatic area (which means in practice: (nearly) everywhere!) Recently I’ve recommended lying side by side on the hard floor of her studio, on her lovely plush rug, still very firm the combo, and trying to meld spine to floor: stretch, twist, jiggle, adjust … then do mild back stretching exercises. So: there we were, stretching, rolling, twisting, settling the back to find its own straightness: and I, as I expected to, merged that into the first ten of my (theoretically) daily twenty crunches. I do ten, breathe an extra breath, ten more: done. I used to do thirty, but found myself skipping far too many days, my belly was waxing once again, as it started doing in middle age, if not before. So: yes, reducing the prescription to twenty resulted in doing them on more days. [Aye, now I do only ten! and not everyday! But at least I do them most days.]

In 2007 I was doing my thirty, walking a mile or two, doing more calisthenics, jogging another half mile, or mile … Blah, blah, thirty more crunches, some curls in the weight area, sprint one hundred yards, ten push ups … When I came upon a park bench, I’d do five or ten inclined push ups, walk on, jog on, do some more curls, come to another bench, do another five inclined pushups. Till that dreadful day when I realized I’d done forty inclined push ups: two more sets of five and I’d have done fifty! first ever! But no: at 47 or so, rip! My right triceps (or something) tore. Idiot me, I keep going, get to fifty: wrecked myself: for years: though it seems stronger again now.

Anyway, that’s how this morning’s crunches built up: ten: breathe: ten more: till, suddenly, it was one hundred!

Oh: and of course, during that breathe, I roll toward Jan, and caress her, fondle her …
After I reached my one hundred crunches, I rolled her onto her stomach and massaged her back: shoulders, back, hips, backside … Wonderful! So sensuous.

Now if I can lay off the ice cream for a month or two, the belly may actually reduce toward pretty damn good for seventy-five. 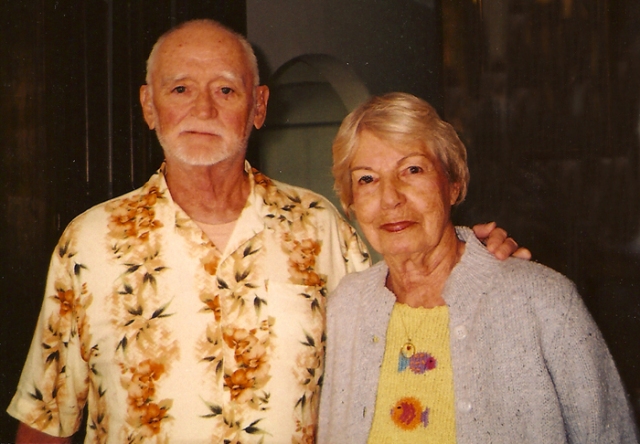 between her TV room & kitchen

Last night Jan and I danced to the New Era band: twelve pieces, damn good: five saxes: two altos, two tenors, and a barry. She’s eighty-two, coming up on eighty-two-and-a-half, cute as a button, still looks like the little cheer leader that got her on the front page of the Tribune back in 1950. Her new hips help greatly but she needs a couple of new knees too, bone on bone, and these days her feet get sprained, sore, broken. Still, we do fabulously for a pair of old farts. 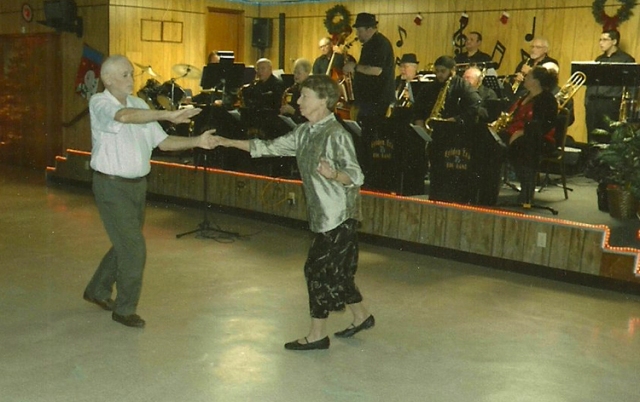 The “C” of my title is of course the Roman numeral symbol for “one hundred”; it is not intended as the abbreviation (lower-case) of circa: “c.”: meaning around, approximately.

2014 02 13 I’m currently doing xity to one hundred crunches a day and other calisthenics too: jumping jacks, toe touches, all kinds of stretches. But yesterday and today something unusual happened: I couldn’t keep track of my count. Did I just to five, or twenty-five? Previously I might lose count for a crunch or two: say ten, never might if it was actually twelve. But I don’t want to say sixty if it was actually eighty. Never mind, I did a lot.

Seems to me that some modicum of honesty is requisite to intelligence. If we look in the mirror and see not kleptocrats but Christians, we’re still in the same old trouble.
View all posts by pk →
This entry was posted in chat, pk and tagged crunches. Bookmark the permalink.