Dancing, including ballet, has meant more to me than average. I’m a dancer, I dated dancers, dancers on Broadway, but I never tried ballet. I did however not join the crowds, my “peers”, posing against it. I got dirty looks I can still feel under my skin the summer of 1956 when I mentioned at work that I’d attended a ballet. QED: I must be a faggot!

Being a good dancer cost me: socially, economically, but in my thirties it also started making me some money. 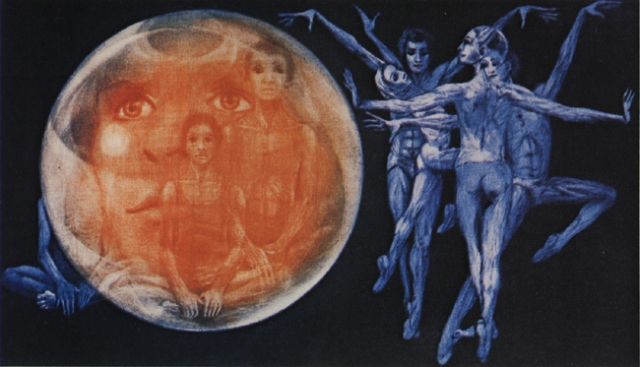 The Rothe edition I published in the mid-1970s, Interlude, was I believe her best mezzotint to date! One of its distinctions was to be small: at a time when she was rocking up 40″ plates. My other Rothe editions from that period were also small (and also mostly ballet).

PK Fine Arts, Ltd. became known for ballet art. Other ballet artists flocked to me: from more than one style. 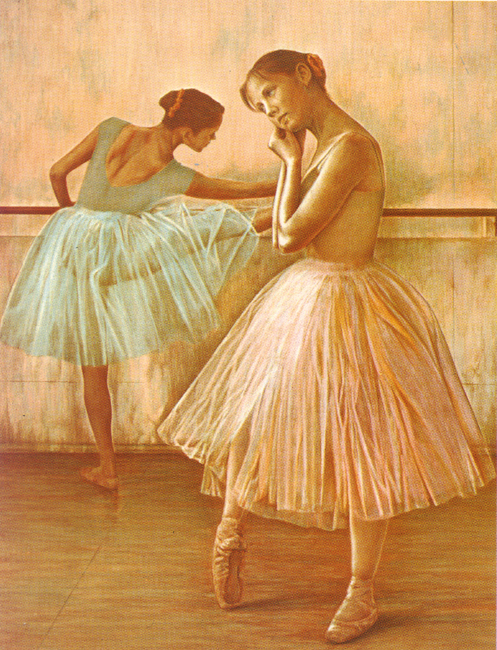 I gotta tell a story about that lithograph. The first gallery I showed Silence to (line from a Yeats poem) was Brewster Gallery on 7th around 12th: the Village. Jerry Brewster, a guy I’d known as a fellow Whitehorse Tavern client in the 1950s owned it. His sister Gertrude ran it, wrote the checks. Gertrude took my print on first offer, said “Just a minute, I’ll write you a check”. I said “I gotta run, I’ll be back in an hour”. Well it was more like two hours before I was able to return. Gertrude has closed. But: there was Her Mind Moves Upon Silence framed and in the window. And also, lurking in the shadow of the recessed doorway, seeming to be glancing sideways at the litho, was a female: a young female: a very good-looking young female. She was there first: I didn’t invade her space. I waited for her to move off so I could get closer for a better view of how it looked in its position of prominence. But her lurking stayed stuck. So eventually, without moving closer, I asked her: “Are you looking at the ballet lithograph?” She murmured wistfully, “That’s me”.
The picture captured her soul? Sure, it was supposed to. I said, “That’s a lithograph by David Tamerin, just printed, just signed. See the “pk” embossed in the lower left corner? That’s for PK Fine Arts, Ltd. I’m pk, I’m the publisher”. She said, “I’m Julie. I posed for David. That’s me, the girl on the left”. (I told her she should buy it, she said she couldn’t afford it, she was just a student at the Joffrey Ballet, right around the corner. I told her to call me: I’d make sure she could afford it: couldn’t afford not to buy it … but I didn’t twist her neck, I left her, lurking.
I was back for my check first thing the next morning. Her Mind Moves Upon Silence was no longer in the window. First thing Gertrude says: “I sold it!” I said, “Ah, I know who you sold it to! Julie, the brunette in the image. She told me she couldn’t afford it”. Gertrude says, “She said she was the model but her name wasn’t Julie, she said it was Lori. She said she bought it for her mother.
Wow. I sell Gertrude the graphic, Gertrude frames and stages it immediately. Julie sees it in the window. Julie goes home, calls her buddy, Lori, Lori’s there with money in her hand the next morning.

Seems to me that some modicum of honesty is requisite to intelligence. If we look in the mirror and see not kleptocrats but Christians, we’re still in the same old trouble.
View all posts by pk →
This entry was posted in dance and tagged ballet. Bookmark the permalink.