Extremism and religion go together, do they not? automatically? Is not a god an extreme? a tall story? Hyperbole? overstatement overstated? The Jewish god is an extreme of jealousy, of ambition, of braggadocio. Jesus is an extreme of sacrifice, of altruism. of martyrdom … of whistleblowing, the little man dragging down big men … Other gods embody – embody without the body that is – appetite, gluttony … Buddha embodies spirit in a body …

In Rossellini’s Flowers of Saint Francis, Francis and his brethren climb a hill to a big house. They mount to the door and knock. Through the door they beg for alms. Quasimodo opens bearing a cudgel, beats them. Still they beg for alms, still the roughneck beats them. Just before that they had been asking Francis what would constitute perfect happiness: now Francis tells his brethren, this is it: we’ve been beaten for our faith. We’ve achieved the height of happiness. God died on the cross, we’ve been beaten down the hill.

I get a manuscript back from the publisher, rejected again! Could I be happier if I won the Nobel Prize? As a man, a living being, yes, I could be a lot happier: my manuscript could have been accepted, for example. The envelop could contain a nice check. But as a religious; no: failure, extreme failure is an achievement. Petrifaction. putrifaction, perfect.

I got the Saint Francis stuff as a child. But by the time I was a teen I was meeting begging holy men in India, in Kim: monks who had nothing to do with any faith in Jesus. Kipling stepped us out of Christianity and into the rest of the world in the fewest possible steps. 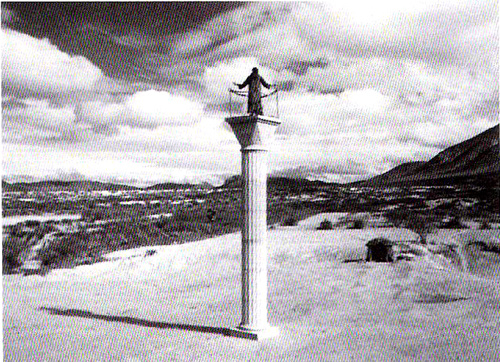 Want to be holy? How about standing on a pole for ten years, night and day, in all weather.

We think of crucifixion as a bad death: murder wedded to torture. But Jesus’ crucifixion is relatively benign, if you compare the gospels’ reports to possible crucifixions: for example, Jewish tradition didn’t forbid torture, but it did forbid torture during the Sabbath. So: Jesus got a spear in his side before sundown; not to relieve his suffering but to lighten the guilt on the Jews. Anyway, in the 1960s we Christians were seeing voluntary martyrdoms that were intense, highly visual, and over in a minute.

These Buddhist monks knew that they had to hold their pose for some very hard seconds: like seppuku suicides among samurai were applauded by the length of the cut to the abdomen before pain and fear made the suicide falter. Mishima made a long cut to his own belly before his buddy froze his pose by beheading him. Japanese jaws dropped as they were reminded of the legendary old days.

Jesus on the cross, that’s religious: and extreme. Mishima with his guts glistening in his lap: that’s extreme too, and religious: whether you like it or not.

This is a scrapbook: I’ll blurt first, organize later.

Lighten the Guilt on the Jews
Of course giving Jesus the coup de grace at sunset also lightened the guilt on the Romans! Who cared about that? Well, in the early days when the New Testament was getting written, different sects were sabotaging each other left and right. AntiSemitism was a big theme in early Christianity; but so too was Rome: it’s a Roman religion, expands the Roman empire! Church of Rome!

Seems to me that some modicum of honesty is requisite to intelligence. If we look in the mirror and see not kleptocrats but Christians, we’re still in the same old trouble.
View all posts by pk →
This entry was posted in religion. Bookmark the permalink.