Jan has a beautiful home on Lake Charlotte. 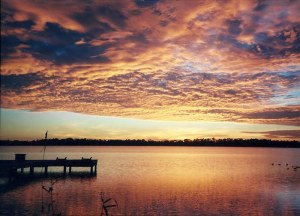 You see the lake above (banner), the photo at least a decade old.
In the post you see her canoe, me, my grandson, my daughter-in-law: just a couple of Christmases ago.
So nice whenever. Except for certain neighbors.

My understanding from Jan: Lake Charlotte is a private lake. There’s no public access. There are however a couple of local access lanes for property owners whose land is not directly on the lake. I’ll call Jan’s right-of-way the Booth Drive right-of-way. If you live on Booth Drive but not directly on the shore of Lake Charlotte you can launch your boat via the right-of-way. Very pretty. I am one of several people maintaining it. I don’t mow it but I do weed it, pick up debris. Or I had been till chaos conquered all.

For two months now neighbor Dave Galati has parked a grungy bass boat on the right-of-way right under Jan’s nose as it were: directly out her kitchen view. Only one other time in the eight or so years I’ve known and loved her has anyone left a boat on the Booth Drive right-of-way. That person disappeared, the cops on his tail. The cops removed his boat and trailer, his father sold the house: neighborhood evaporation. That neighbor had no right to park a boat on the right-of-way, but no one said anything to him that I know of. He had his boat chained to Jan’s slash pine tree: then, that once, till he was arrested.

Since then the lake has risen, the lake weeds have grown rampant. The right-of-way still looks great. Dave had been mowing it. I weed it, clear it of debris. Jan’s lawn guy mows it without any instructions to do so. Since Dave’s boat has been parked there under Jan’s nose her lawn guy has not mowed there. I though pick up tree debris: fallen pine cones, moss …

Let me clarify: only local residents are welcome — by the county, by the sheriff, by the neighbors — to use the right-of-way. No one has a right to park anything there. It’s private communal property; not the property of any individual or family. Certainly no one had the right to park there for two months! But Dave did. By Right of Rudeness.

Jan’s neighbors pick on her. She’s cute, she’s petite, she looks (but isn’t) rich. They didn’t used to pick on her. I’m confident that they pick on her because of me. I’m a radical, an enemy of the state. I’m the deschooler. I’m an anarchist: against all government, against social coercion. I’m sabotaged by my universities, by my employers … by the FBI, by the federal bureau of prisons … by the publishers who didn’t publish my work, by the colleges that didn’t hire me, by the colleges that illegally fired me … other institutions are still doing that! … by the public which failed to support the internet I started and ran from 1970 to 1974, and then plagiarized into this internet we’re using now: all theft: all due to be punished by the innovations’ coauthor, God.

People in Highlands County know that they can do anything they want to me: the county, the state, the fed, will back the lynchers, not me: will bring more tar, more feathers. But Jan has always been different. Jan is a person you lie down in the road for, so you’ll be run over, not she.

Anyway, today a crew of yard people, were at her house, trimming, clearing. I was already trimming when they arrived, then we all worked together. Very nice. I like Tom, he seems to like me. He certainly sees how hard I work for Jan and her yard. So I said to Jan, while Tom is here, let’s move Dave’s wreteched distressed boat out from under your nose. We did. we moved it to the other side of the right-of-way, not quite so under her nose. It’s still on community property. It’s still ghastly, but it’s not quite so irritating.

2016 05 24 I posted the above yesterday. Already last evening I got a couple of updates from Jan:
She called the cops, as I joined Tom in urging her to do. The cops reminded Jan that she doesn’t live in the city of Sebring: her problems are the business of the county: county codes and code enforcement. The county is busy: she gets put at the end of a long line of complainants. The county dates the complaint not from two months ago but from yesterday.
Meantime Dave confronts Jan, calls her the bitch of the block, declares that no one likes her … and she insults him back: he’s really pissed her off, for years now.

I just added more, but I’m saying more than I should about her problems: I don’t want to make things worse for her. Me? I used to things being bad for me. Jan is used to that too. I move today’s additional babble elsewhere, in quarantine.

Seems to me that some modicum of honesty is requisite to intelligence. If we look in the mirror and see not kleptocrats but Christians, we’re still in the same old trouble.
View all posts by pk →
This entry was posted in local. Bookmark the permalink.