I just remembered a date from the 1970s. I was invited to a party by a client in Rockville Centre on Long Island. The party was in Balkwin. My client’s granddaughter would be there: a former Broadway show girl, a singer, dancer, actress, now unfortunately crippled. The girls at the party all were attractive and looked ripe for an affair. They looked non-plussed as I paid attention only to the cripple. I’m not sure what Grandma intended but I began to fantasize about the cute hips and round once-dancer’s-bottom of the girl I’ll call “Hair”, ’cause that’s the title of the show she had been appearing in when she became crippled. I invited her for a weekend and her family delivered her to me in Long Beach: she needed taxi service and they volunteered trip one.

I want to ponder one thing that made my attraction to her evaporate:

Who Is the Waiter Serving?
Women and Children; Not Work-A-Daddy.

Hair wants veal picata for diner, she requested a favorite restaurant. The waiter recognized her: fine: catereed to her: fine: ignored me; not fine.
The waiter brings menus, asks Hair only if she’s ready to order, ignores me. He finally takes my order too, as an afterthought. Mid meal the waiter asks Hair, not me, how everything is.
We eat, we have desert, the waiter shoves the bill by my elbow, still not looking at me.

I’m mad at the waiter, mad at the restaurant for having such an ill-trained waiter, but I’m also a little mad at Hair for so utterly cooperating with the waiter’s ignoring of me, the presumed Work-a-Daddy: the scmuck bill payer: the Daddy who not only knows not-best, but not-at-all: like the Romanoff’s during the Russian Revolution.

I’m with her, it’s a first date, I’m trying to be nice: but I was tempted to insist that the waiter present the bill to Hair! not me. What did I, 1970 inventor of the internet, have to do with the bill?

Hair and I were going to walk on the boardwalk later one. My apartment was 210 Shore Road, right on the boardwalk, open sky all around, left to right. I’d screw her brains out, then we’d have a nice walk. But the TV was on, PBS, and the announcer promised a documentary on Edvard Munch. 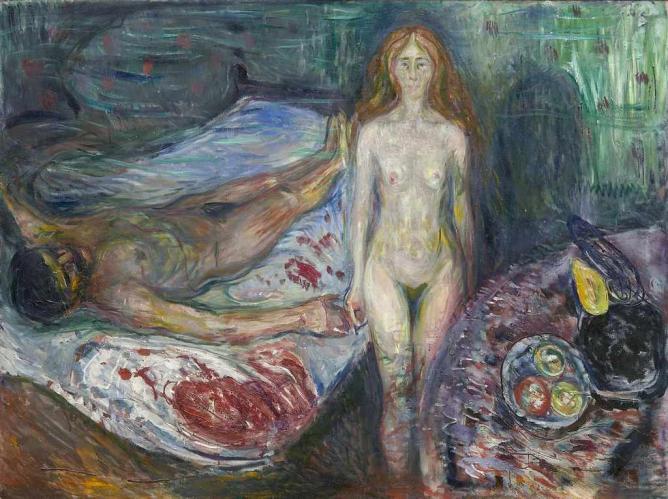 after David’s Death of Marat, Munch and girlfriend modeling

“Oh, wait, I have to see that.””
But Hair never understood what I was talking about: and I was despairing that she’d never understand anything I said. Maybe I shouldn’t have pronounced the artist’s name in Norwegian. Maybe she wouldn’t have known Picasso either.

I don’t think I could ever explain to her what restaurant manners used to be once upon a time. We grew up in different worlds. But there was something else too, something I absolutely would not address with her:
In the 1950s and into the 1960s Barbara Streisand’s People was all over the jukebox. I’d get up and leave the West End when it came on. She was emoting, but it wasn’t singing, she was screaming: I couldn’t stand it. So, mid-meal Hair announces to me that Barbara Steisand is the greatest singer. I didn’t leap in to agree: so she insisted that I understand that she, Hair, a Broadway singer, was an expert, a professional singer herlself, blah blah blah. No, no: it shouldn’t be for me to introduce this barbarian to Billie Holliday, to Lena Horne, to a couple of really great singers.

If you don’t understand that I’m the founder of FLEX, a disciple of master Christian Ivan Illich, that my FLEX gave the world a chance to become Christian, at least to discuss a couple of the implications, you can’t know what I’m saying or who’s saying it.
I failed: before, then, since: but I join a host of failures (results not yet in).

A re-edit might help. There’s a zillion find points not yet mentioned.

Seems to me that some modicum of honesty is requisite to intelligence. If we look in the mirror and see not kleptocrats but Christians, we’re still in the same old trouble.
View all posts by pk →
This entry was posted in culture. Bookmark the permalink.